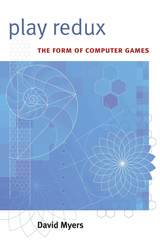 "Play Redux excels in tying together intellectual traditions that are rooted in literary studies, cognitive science, play studies and several other fields, thereby creating a logical whole. Through this, the book makes service to several academic communities by pointing out their points of contact. This is clearly an important contribution to a growing academic field, and will no doubt become important in many future discussions about digital games and play."
---Frans Mäyrä, University of Tampere, Finland

Play Redux is an ambitious description and critical analysis of the aesthetic pleasures of video game play, drawing on early twentieth-century formalist theory and models of literature. Employing a concept of biological naturalism grounded in cognitive theory, Myers argues for a clear delineation between the aesthetics of play and the aesthetics of texts. In the course of this study, Myers asks a number of interesting questions: What are the mechanics of human play as exhibited in computer games? Can these mechanisms be modeled? What is the evolutionary function of cognitive play, and is it, on the whole, a good thing? Intended as a provocative corrective to the currently ascendant, if not dominant, cultural and ethnographic approach to game studies and play, Play Redux will generate interest among scholars of communications, new media, and film.