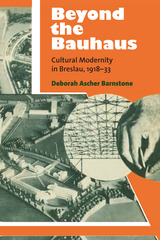 BUY
Beyond the Bauhaus: Cultural Modernity in Breslau, 1918-33
by Deborah Ascher Barnstone
University of Michigan Press, 2016
Cloth: 978-0-472-11990-5
eISBN: 978-0-472-12194-6
Although the Breslau arts scene was one of the most vibrant in all of Weimar-era Germany, it has largely disappeared from memory. Studies of the influence of Weimar culture on modernism have focused almost exclusively on Berlin and the Dessau Bauhaus, yet the advances that occurred in Breslau affected nearly every intellectual field, forming the basis for aesthetic modernism internationally and having an enduring impact on visual art and architecture. Breslau boasted a thriving modern arts scene and one of the premier German arts academies of the day until the Nazis began their assault on so-called degenerate art. This book charts the cultural production of Breslau-based artists, architects, art collectors, urban designers, and arts educators who operated in the margins of Weimar-era cultural debates. Rather than accepting the radical position of the German avant-garde or the reactionary position of German conservatives, many Breslauers sought a middle ground.

This richly illustrated volume is the first book in English to address this history, constituting an invaluable addition to the literature on the Weimar period. Its readership includes scholars of German history, art, architecture, urban design, planning, collecting, and exhibition history; of the avant-garde, and of the development of arts academies and arts pedagogy.

AUTHOR BIOGRAPHY
Deborah Ascher Barnstone is Professor of Architecture at the University of Technology, Sydney.