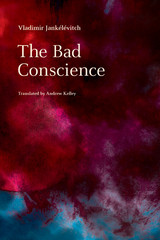 University of Chicago Press, 2014
Cloth: 978-0-226-00953-7
Vladimir Jankélévitch was one of the most distinctive voices in twentieth-century philosophy. In The Bad Conscience—published in 1933 and subsequently revised and expanded—Jankélévitch lays the foundations for his later work, Forgiveness, grappling with the conditions that give rise to the moral awareness without which forgiveness would make no sense. Remorse, or “the bad conscience,” arises from the realization that the acts one has committed become irrevocable. This realization, in turn, gives rise to an awareness of moral virtues and values, as well as freedom and the responsibilities freedom entails. Thus, while the majority of moral systems try to shield us from remorse, the remedy for the bad conscience lies not in repentance but in the experience of remorse itself.

To this careful and sensitive English-language translation of The Bad Conscience, translator Andrew Kelley has added a substantial introduction situating the work in historical and intellectual context. Notes throughout indicate differences between this and earlier editions. A thought-provoking critique of standard conceptions of moral philosophy, The Bad Conscience restores this work by an important philosopher who has only recently begun to receive his due from the English-speaking world.
AUTHOR BIOGRAPHY
Vladimir Jankélévitch (1903–85) held the Chair in Moral Philosophy at the Sorbonne from 1951 to 1978. He is the author of more than twenty books on philosophy and music, including Le Pardon, or Forgiveness, also published in English-language translation by the University of Chicago Press. Andrew Kelley is associate professor of philosophy at Bradley University. He is also the translator of Jankélévitch’s Forgiveness.
REVIEWS
Praise for Vladimir Jankélévitch

“One of the most singular voices of twentieth-century French philosophy.”
— Critical Inquiry

“His voice is unique among a generation of French philosophers who were each gifted writers and thinkers. Unlike others in the pantheon of 20th century French philosophy, Jankélévitch eschews grand gestures and revolutionary claims. Neither ponderous nor pedantic, the seriousness that infuses Jankélévitch’s thought, and in particular The Bad Conscience … unfolds along chromatic scales played with a lightness of touch both demanding and generous. There is something of the master performer and master teacher—un maître à penser—from whom there is much to learn, provided one is disposed with a saintly patience and open to an unfinished adventure. This book is Jankélévitch’s first original work of philosophy …. The first in a series of shorter books published until the outbreak of the Second World War, The Bad Conscience announces many of the themes and directions that would fully mature over the course of Jankélévitch’s philosophical development.”
— Nicolas de Warren, Notre Dame Philosophical Reviews