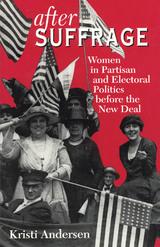 Debunking conventional wisdom that women had little impact on politics after gaining the vote, Kristi Andersen gives a compelling account of both the accomplishments and disappointments experienced by women in the decade after suffrage. This revisionist history traces how, despite male resistance to women's progress, the entrance of women and of their concerns into the public sphere transformed both the political system and women themselves.

Andersen shows how women's participation was based on a conception of women's citizenship as indirect and disinterested. Gaining the right to vote, campaign, and run for office transformed women's citizenship; at the same time, women's independent partisan stance, their focus on social welfare concerns, and their use of new political techniques such as lobbying all helped to redefine politics.

This fresh, nuanced analysis of women voters, activists, candidates, and officeholders will interest scholars in political science and women's studies.

"In this rich and engaging book, Kristi Anderson presents a convincing argument that woman suffrage deserves greater scrutiny as a social, cultural, and political force in the development of American electoral and party politics."—Jane Junn, Political Science Quarterly

"Anderson's innovation in this book is to change the dominant question asked about American women's suffrage. . . . This book offers a much-needed corrective to the conventional conception that the enfranchisement of women had no significant effect on American society."—Inderjeet Parmar, Political Studies

"Anderson's book is an excellent treatment . . . and a sterling example of the value of using multiple research methods—also steeped within a deep understanding of context, culture, and historic trends—to explain something as complicated and nuanced as the impact of women's votes after suffrage."—Laura R. Woliver, Journal of Politics
TABLE OF CONTENTS