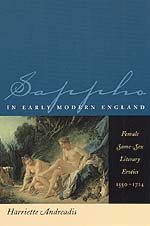 In Sappho in Early Modern England, Harriette Andreadis examines public and private expressions of female same-sex sexuality in sixteenth- and seventeenth-century England. Before the language of modern sexual identities developed, a variety of discourses in both literary and extraliterary texts began to form a lexicon of female intimacy. Looking at accounts of non-normative female sexualities in travel narratives, anatomies, and even marital advice books, Andreadis outlines the vernacular through which a female same-sex erotics first entered verbal consciousness. She finds that "respectable" women of the middle classes and aristocracy who did not wish to identify themselves as sexually transgressive developed new vocabularies to describe their desires; women that we might call bisexual or lesbian, referred to in their day as tribades, fricatrices, or "rubsters," emerged in erotic discourses that allowed them to acknowledge their sexuality and still evade disapproval.
AUTHOR BIOGRAPHY
Harriette Andreadis is an associate professor of English at Texas A&M University.
TABLE OF CONTENTS