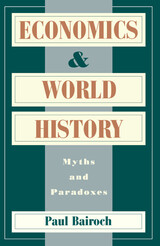 Paul Bairoch sets the record straight on twenty commonly held myths about economic history. Among these are that free trade and population growth have historically led to periods of economic growth; that a move away from free trade caused the Great Depression; and that colonial powers in the nineteenth and early twentieth centuries became rich through the exploitation of the Third World. Bairoch argues that these beliefs are based on insufficient knowledge and misguided interpretations of the economic history of the United States, Europe, and the Third World.


List of Statistical Tables
General Introduction
Pt. I: Major Myths About the Developed World
1: The 1929 Crash and the Great Depression
2: Was there a Golden Era of European Free Trade?
3: Was there Free Trade in the Rest of the World?
4: Has Protectionism Always had a Negative Impact?
Pt. II: Major Myths on the Role of the Third World in Western Development
5: Were Third-World Raw Materials Central to Western Industrialization?
6: Were Colonial Outlets Crucial to Western Industries?
7: Was Colonialism Important in Triggering the Industrial Revolution?
8: The Balance Sheet of Colonialism
Pt. III: Major Myths About the Third World
9: Was there a Large Income Differential before Modern Development?
10: A long-term Deterioration in the Terms of Trade?
11: The More Tropical Products Exported, the More Food Imported?
12: Population Growth: the More, the Better?
Pt. IV: 'Minor' Myths and Unnoticed Turning Points
13: Some Less Important Myths
14: Generally Unnoticed Historical Turning Points
Conclusions: The Paradox of Economic History or the Absence of Absolute
Economic Laws
Index