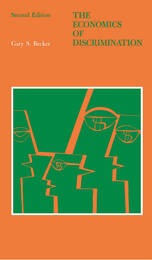 This second edition of Gary S. Becker's The Economics of Discrimination has been expanded to include three further discussions of the problem and an entirely new introduction which considers the contributions made by others in recent years and some of the more important problems remaining.

The original edition of The Economics of Discrimination was warmly received by economists, sociologists, and psychologists alike for focusing the discerning eye of economic analysis upon a vital social problem—discrimination in the market place.

"This is an unusual book; not only is it filled with ingenious theorizing but the implications of the theory are boldly confronted with facts. . . . The intimate relation of the theory and observation has resulted in a book of great vitality on a subject whose interest and importance are obvious."—M.W. Reder, American Economic Review

"The author's solution to the problem of measuring the motive behind actual discrimination is something of a tour de force. . . . Sociologists in the field of race relations will wish to read this book."—Karl Schuessler, American Sociological Review
TABLE OF CONTENTS