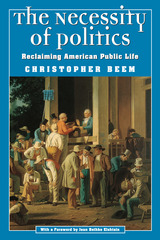 Even in the midst of an economic boom, most Americans would agree that our civic institutions are hard pressed and that we are growing ever more cynical and disconnected from one another.

In response to this bleak assessment, advocates of "civil society" argue that rejuvenating our neighborhoods, churches, and community associations will lead to a more moral, civic-minded polity. Christopher Beem argues that while the movement's goals are laudable, simply restoring local institutions will not solve the problem; a civil society also needs politics and government to provide a sense of shared values and ideas. Tracing the concept back to Tocqueville and Hegel, Beem shows that both thinkers faced similar problems and both rejected civil society as the sole solution. He then shows how, in the case of the Civil Rights movement, both political groups and the federal government were necessary to effect a new consensus on race.

Taking up the arguments of Robert Putnam, Michael Sandel, and others, this timely book calls for a more developed sense of what the state is for and what our politics ought to be about.

"This book is bound to incite controversy and to contribute to our ongoing grappling with where our own democratic political culture is going. . . . Beem helps us to get things right by offering a corrective to any and all visions of civil society sanitized from politics."—Jean Bethke Elshtain, from the Foreword

"[Beem] makes an impressive case. At the end of the day, there really is no substitute for governmental authority in fostering the moral identity of the body politic."—Robert P. George, Times Literary Supplement
AUTHOR BIOGRAPHY
Christopher Beem directs the Democracy and Community Program at The Johnson Foundation and is the author of Pluralism and Consensus: Conceptions of the Good in the American Polity.
TABLE OF CONTENTS