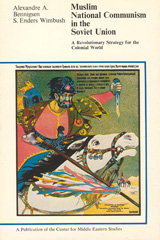 In this study, Bennigsen and Wimbush trace the development of the doctrine of national communism in Central Asia and the Caucasus. At the heart of this doctrine—as elaborated by the Volga Tatar, Mir-Said Sultan Galiev—was the concept of "proletarian nations," as opposed to the traditional notion of a working class. With such ideological innovations, Sultan Galiev and his contemporaries were able to reconcile Marxist nationalisms and Islam and devise an "Eastern strategy" whereby the national revolution was to be spread.

The authors show that the ideas of Muslim national communism persist in the land of their birth and have spread to such developing societies as China, Algeria, and Indonesia. This doctrine is an important factor in the ideological split and increasing tensions between industrial and nonindustrial nations, East and West, and now North and South, which grip the world communist movement.
TABLE OF CONTENTS