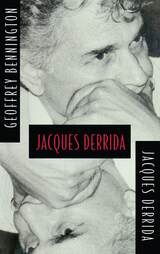 This extraordinary book offers a clear and compelling biography of Jacques Derrida along with one of Derrida's strangest and most unexpected texts. Geoffrey Bennington's account of Derrida leads the reader through the philosopher's familiar yet widely misunderstood work on language and writing to the less familiar themes of signature, sexual difference, law, and affirmation. In an unusual and unprecedented "dialogue," Derrida responds to Bennington's text by interweaving Bennington's text with surprising and disruptive "periphrases." Truly original, this dual and dueling text opens new dimensions in Derrida's thought and work.

"Bennington is a shrewd and well-informed commentator whose book should do something to convince the skeptics . . . that Jacques Derrida's work merits serious attention."—Christopher Norris, New Statesman & Society

"Geoffrey Bennington and Jacques Derrida have presented a fascinating example of what might be called post-structuralist autobiography."—Laurie Volpe, French Review

"Bennington's account of what Derrida is up to is better in almost all respects—more intelligent, more plausible, more readable, and less pretentious—than any other I have read."—Richard Rorty, Contemporary Literature
TABLE OF CONTENTS


"This book presupposes a contract"
Derridabase by Geoffrey Bennington
With Time
Remark
The Beginning
The Sign
Writing
Husserl
Différance
Context
Beyond
The Proper Name
Circumfession by Jacques Derrida
Time and Finitude
Metaphor
The Unconscious
The Signature
Translation
Babel
Literature
The Gift
Sexual Difference
The Mother: Chora
Femininity
Politics
The Title
The Institution
The Series: (Quasi-) Transcendental Questions
The Closure
The Jew
Striction
Being the Other
The Machine
Envoi
Acts (The Law of Genre)
Curriculum Vitae
Bibliography (including list of abbreviations of Derrida's works cited in text)
Supplemental Bibliography
Illustration Sources