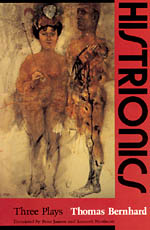 Although he is best known in the United States as a novelist, Austrian writer Thomas Bernhard has been hailed in Europe as one of the most significant and controversial of contemporary playwrights. George Steiner has predicted that the current era in German-language literature will be recognized as the "Bernhard period"; John Updike compares Bernhard with Kafka, Grass, Handke, and Weiss. His dark, absurdist plays can be likened to those of Beckett and Pinter, but their cultural and political concerns are distinctly Bernhard's. While Austria's recent political history lends particular credibility to Bernhard's satire, his criticisms are directed at the modern world generally; his plays grapple with questions of totalitarianism and the subjection of the individual and with notions of reality and appearance.
TABLE OF CONTENTS