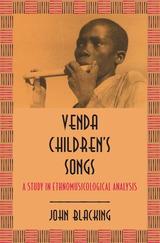 John Blacking is widely recognized for his theoretical works How Musical Is Man? and The Anthropology of the Body. This series of essays and articles on the music of the Venda people of the northern Transvaal in South Africa constitutes his major scholarly legacy.

Venda Children's Songs presents a detailed analysis of both the music and the cultural significance of children's songs among the Venda. Among its many original contributions is the identifying of the role of melody in generating rhythm, something that distinguishes this form of music from that of Venda adults as well as from other genres of African music in general.
TABLE OF CONTENTS

Chapter 1 - The Background to the Analysis of the Songs
The Venda of the Northern Transvaal
Some Basic Definitions and Concepts of Venda Music
Musical Instruments
The Variety and Meaning of Venda Communal Music
Music for Young People in Venda Society
1. Children's songs
2. Play-dances for boys and girls
3. "Amusements" for boys and girls
4. The Venda national dance (tshikona)
The Collection of Material for Analysis
The Place of Children's Songs in the Venda Musical Repertoire
The Social Function of the Children's Songs
The Importance of the Words of the Children's Songs
Methods of Research
The Texts and Musical Transcriptions

Chapter 3 - The Structure of the Children's Songs
Patterns of Rhythm
The Metrical Distinction between Speech and Song
Poetic Licence
1. Economy of Expression
2. Syllabic Adjustment
Metrical Patterns of the Songs: The Results of a Controlled Test
Tempo
Correspondence between the Rhythm of Words Spoken and Sung

Appendix I: Speech-Tone and Melody
Appendix II: Telling the Parts of the Body: An Old Venda
Bibliography
Index