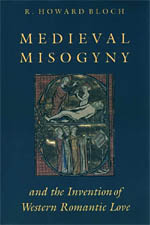 Until now the advent of Western romantic love has been seen as a liberation from—or antidote to—ten centuries of misogyny. In this major contribution to gender studies, R. Howard Bloch demonstrates how similar the ubiquitous antifeminism of medieval times and the romantic idealization of woman actually are.

Through analyses of a broad range of patristic and medieval texts, Bloch explores the Christian construction of gender in which the flesh is feminized, the feminine is aestheticized, and aesthetics are condemned in theological terms. Tracing the underlying theme of virginity from the Church Fathers to the courtly poets, Bloch establishes the continuity between early Christian antifeminism and the idealization of woman that emerged in the twelfth and thirteenth centuries. In conclusion he explains the likely social, economic, and legal causes for the seeming inversion of the terms of misogyny into those of an idealizing tradition of love that exists alongside its earlier avatar until the current era.

This startling study will be of great value to students of medieval literature as well as to historians of culture and gender.
TABLE OF CONTENTS


Acknowledgments
Introduction
1. Molestiae Nuptiarum and the Yahwist Creation
2. Early Christianity and the Estheticization of Gender
3. "Devil's Getaway" and "Bride of Christ"
4. The Poetics of Virginity
5. The Old French Lay and the Myriad Modes of Male Indiscretion
6. The Love Lyric and the Paradox of Perfection
7. Heiresses and Dowagers: The Power of Women to Dispose
Notes
Bibliography
Index