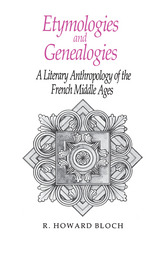 "Mr. Bloch has attempted to establish what he calls a 'literary anthropology.' The project is important and ambitious. It seems to me that Mr. Bloch has completely achieved this ambition." –Michel Foucault

"Bloch's Study is a genuinely interdisciplinary one, bringing together elements of history, ethnology, philology, philosophy, economics and literature, with the undoubted ambition of generating a new synthesis which will enable us to read the Middle Ages in a different light.

Stated simply, and in terms which do justice neither to the density nor the subtlety of his argument, Bloch's thesis is this: that medieval society perceived itself in terms of a vertical mode of descent from origins. This model is articulated etymologically in medieval theories of grammar and language, and is consequently reflected in historical and theological writings; it is also latent in the genealogical structure of the aristocratic family as it began to be organized in France in the twelfth century, and is made manifest in such systems of signs as heraldry and the adoption of patronymns. . . .

It is an ingenious and compelling synthesis which no medievalist, even on this side of the Atlantic, can afford to ignore." –Nicholas Mann, Times Literary Supplement
AUTHOR BIOGRAPHY
R. Howard Bloch, chairman of the French Department at the University of California Berkeley, is the author of The Scandal of the Fabliaux, also published by the University of Chicago Press.
TABLE OF CONTENTS

Introduction: Toward a Literary Anthropology of the Middle Ages

2.    Kinship
The Biopolitics of Lineage
The Aristocratic Practice of Signs
Grammar and Lineage
The Tree of Jesse

3.    Literature and Lineage
The Epic
The Poetics of Disruption

4.    Poetry, Philosophy, and Desire
Rhetoric and Desire
Philosophy and the Family
Nominalist and Modal Grammar

5.    The Economics of Romance
Household
Money
The Courtly Novel

6.    Grail Family and Round Table
The Wasteland
Grail Quest and the Quest for the Name of the Father
Geneaology of the Book and the Book of Geneaology
Round Table and the Politics of Intention

Appendix A
Appendix B
Notes
Index