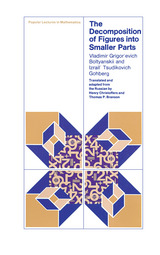 The Decomposition of Figures Into Smaller Parts
by Vladimir Grigor'evich Boltyanskii and Izrail' Tsudikovich Gokhberg
University of Chicago Press, 1980
Paper: 978-0-226-06357-7
In contrast to the vast literature on Euclidean geometry as a whole, little has been published on the relatively recent developments in the field of combinatorial geometry. Boltyanskii and Gohberg's book investigates this area, which has undergone particularly rapid growth in the last thirty years. By restricting themselves to two dimensions, the authors make the book uniquely accessible to interested high school students while maintaining a high level of rigor. They discuss a variety of problems on figures of constant width, convex figures, coverings, and illumination. The book offers a thorough exposition of the problem of cutting figures into smaller pieces. The central theorem gives the minimum number of pieces into which a figure can be divided so that all the pieces are of smaller diameter than the original figure. This theorem, which serves as a basis for the rest of the material, is proved for both the Euclidean plane and Minkowski's plane.
TABLE OF CONTENTS