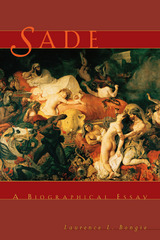 The writings of the Marquis de Sade have recently attained notoriety in the canon of world literature. Now Sade himself is often celebrated as a heroic apostle of individual rights and a giant of philosophical thought. In this detailed investigative work, Laurence Bongie tests these claims and finds them unfounded and undeserved.

"A valuable correction to the perception of Sade as a profound thinker, a great writer, and a martyr to liberty. Drawing on original archival work, Bongie tries to illuminate Sade's childhood and his relationship with his parents. . . . Fluent and well-informed."—Library Journal

"Mr. Bongie . . . has written an investigation focusing on one aspect of Sade's character and development, his heretofore neglected relationship with his aristocratic mother. . . . A profitable selection."—Richard Bernstein, New York Times

"A welcome corrective. Bongie's book . . . aims to deflate the exalted claims made about the marquis by demonstrating that he was a monstrous character."—Scott Stossel, Boston Phoenix Literary Supplement
TABLE OF CONTENTS


Preface
Introduction
Pt. 1: Antecedents
1: Mysterious Mother
2: A Diplomat and His Wife
3: Desperate Measures
4: The End of a Promising Career
5: A Mystery Explained
Pt. 2: Transgressions
6: Master and Pupil
7: Surpassing the Master
8: War and Marriage
9: Jeanne Testard
10: Arcueil
11: Tigress and Cub
12: Beheaded and Burned at the Stake
13: All for a Dying Mother
Pt. 3: Mothers, Whores, and Bogus Politics
14: A Mother Much Loved?
15: Mothers Much Hated
16: The Mother-in-law
17: Vignettes of Vengeance
18: When Do We Believe Him?
19: His Finest Lie
20: Feudal Rights and Nature's Laws
Conclusion
App. I: Chronology
App. II: Sadean Criticism: A Postscript
App. III: Two Letters from the Comtesse de Sade
Notes
Index