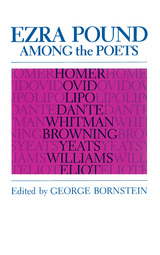 "Be influenced by as many great writers as you can," said Ezra Pound. Pound was an "assimilative poet" par excellence, as George Bornstein calls him, a writer who more often "adhered to a . . . classical conception of influence as benign and strengthening" than to an anxiety model of influence. To study Pound means to study also his precursors—Homer, Ovid, Li Po, Dante, Whitman, Browning—as well as his contemporaries—Yeats, Williams, and Eliot. These poets, discussed here by ten distinguished critics, stimulated Pound's most important poetic encounters with the literature of Greece, Rome, China, Tuscany, England, and the United States. Fully half of these essays draw on previously unpublished manuscripts.
TABLE OF CONTENTS


Acknowledgments
Introduction by George Bornstein
Pound and Homer by Hugh Kenner
Pound and Ovid by Lillian Feder
Pound and Li Po: What Becomes a Man by Ronald Bush
Dreaming a Renaissance: Pound's Dantean Inheritance by Stuart Y. McDougal
Clothing the American Adam: Pound's Tailoring of Walt Whitman by Hugh Witemeyer
Pound's Parleyings with Robert Browning by George Bornstein
Pound and Yeats: The Road to Stone Cottage by A. Walton Litz
Pound and Williams by Thomas Parkinson
Pound and Eliot by Robert Langbaum
The Contemporary of Our Grandchildren: Pound's Influence by Marjorie Perloff
Contributors
Index