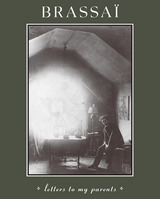 Nicknamed the "Eye of Paris" by Henry Miller, Brassaï was one of the great European photographers of the twentieth century. This volume of letters and photographs, many published for the first time, chronicles the fascinating early years of Brassaï's life and artistic development in Paris and Berlin during the 1920s and 1930s.

"[Brassaï] is probably the only photographer—at least in France—to have acquired such a vast audience and mastered his material to such a degree that he can express himself with a flexibility and apparent ease that is almost literary in its nature."—Jean Gallien, Photo-Monde

"The letters that Brassaï wrote to his parents between 1920 and 1940 chronicle the sometimes painful stages by which this gifted man hauled himself from penury to celebrity."—Peter Hamilton, Times Literary Supplement

"In these proud, protective, occasionally conscience-stricken missives, the young man full of eager dreams emerges as one of the century's pioneering photographers, revered for his lushly atmospheric portraits of Paris after dark."—Elle