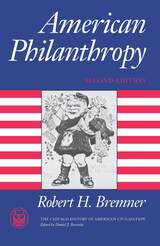 In this revised and enlarged edition of his classic work, Robert H. Bremner provides a social history of American philanthropy from colonial times to the present, showing the ways in which Americans have sought to do good in such fields as religion, education, humanitarian reform, social service, war relief, and foreign aid. Three new chapters have been added that concisely cover the course of philanthropy and voluntarism in the United States over the past twenty-five years, a period in which total giving by individuals, foundations, and corporations has more than doubled in real terms and in which major revisions of tax laws have changed patterns of giving. This new edition also includes an updated chronology of important dates, and a completely revised bibliographic essay to guide readers on literature in the field.

"[This] book, as Bremner points out, is not encyclopedic. It is what he intended it to be, a pleasant narrative, seasoned with humorous comments, briefly but interestingly treating its principal persons and subjects. It should serve teacher and student as a springboard for further study of individuals, institutions and movements."—Karl De Schweinitz, American Historical Review

"[American Philanthropy] is the starting point for both casual readers and academic scholars. . . . a readable book, important beyond its diminutive size."—Richard Magat, Foundation News

AUTHOR BIOGRAPHY
Robert H. Bremner, Professor Emeritus at Ohio State University, is the author of From the Depths: The Discovery of Poverty in the United States and The Public Good: Philanthropy and Welfare in the Civil War Era.
TABLE OF CONTENTS


Introduction
1. Doing Good in the New World
2. Religious and Revolutionary Humanitarianism
3. Benevolence in the Young Republic
4. Saints and Scolds
5. Civil War Philanthropy
6. "Scientific Philanthropy"
7. Benevolent Trusts and Distrusts
8. The Business of Benevolence and the Industry of Destruction
9. A Time to Remember
10. A Voyage Is Now Proposed
11. Looking Backward, 1980s-1960s
12. Giving for Home and Overseas
13. The Public-Private Partnership
Important Dates
Suggested Reading
Acknowledgments
Index