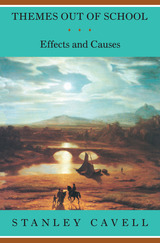 In the first essay of this book, Stanley Cavell characterizes philosophy as a "willingness to think not about something other than what ordinary human beings think about, but rather to learn to think undistractedly about things that ordinary human beings cannot help thinking about, or anyway cannot help having occur to them, sometimes in fantasy, sometimes as a flash across a landscape."

Fantasies of film and television and literature, flashes across the landscape of literary theory, philosophical discourse, and French historiography give Cavell his starting points in these twelve essays. Here is philosophy in and out of "school," understood as a discipline in itself or thought through the works of Shakespeare, Molière, Kierkegaard, Thoreau, Brecht, Makavejev, Bergman, Hitchcock, Astaire, and Keaton.
AUTHOR BIOGRAPHY
Stanley Cavell is the Walter M. Cabot Professor of Aesthetics and the General Theory of Value at Harvard University.
TABLE OF CONTENTS


Preface
The Thought of Movies
The Politics of Interpretation
(Politics as Opposed to What?)
Coriolanus and Interpretations of Politics
("Who does the wolf love?")
A Cover Letter to Molière's Misanthrope
On Makavejev On Bergman
A Reply to John Hollander
Foreword by Jay Cantor's The Space Between
North by Northwest
What Becomes of Things on Film?
The Ordinary as the Uneventful
(A Note on the Annales Historians)
Existentialism and Analytical Philosophy
The Fact of Television