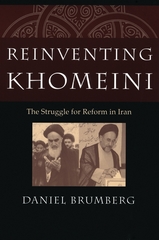 Reinventing Khomeini offers a new interpretation of the political battles that paved the way for reform in Iran. Brumberg argues that these conflicts did not result from a sudden ideological shift; nor did the election of President Mohammad Khatami in 1997 really defy the core principles of the Islamic Revolution. To the contrary, the struggle for a more democratic Iran can be traced to the revolution itself, and to the contradictory agendas of the revolution's founding father, Ayatollah Ruhollah Khomeini.

A complex figure, Khomeini was a fervent champion of Islam, but while he sought a Shi'ite vision of clerical rule under one Supreme Leader, he also strove to mesh that vision with an implicitly Western view of mass participatory politics. The intense magnetism and charisma of the ayatollah obscured this paradox. But reformers in Iran today, while rejecting his autocratic vision, are reviving the constitutional notions of government that he considered, and even casting themselves as the bearers of his legacy. In Reinventing Khomeini, Brumberg proves that the ayatollah is as much the author of modern Iran as he is the symbol of its fundamentalist past.
AUTHOR BIOGRAPHY
Daniel Brumberg is an assistant professor of government at Georgetown University. He is the editor of Ethnicity, Pluralism, and Democracy: A Critical Reader.
TABLE OF CONTENTS


Acknowledgments
Introduction: In Search of the "Real" Iran
1. Remapping Charisma
2. Ascetic Mysticism and the Roots of Khomeini’s Charisma
3. Absorbing the Multiple Imaginations of the Islamic Left: From Shari'ati to Khomeini
4. The Rule of the Jurist: Genesis of a Revolutionary Doctrine
5. Dissonant Institutionalization: The Imam in Power
6. The Trials and Tribulations of Complex Routinization
7. Children (and One Father) of the Revolution
8. Disenchantment, Charisma, and . . . Reform?
Conclusion: Fear and Joy
Postscript
Notes
Index