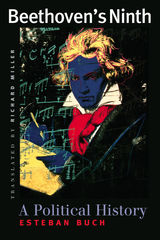 Who hasn't been stirred by the strains of Beethoven's Ninth Symphony? That's a good question, claims Esteban Buch. German nationalists and French republicans, communists and Catholics have all, in the course of history, embraced the piece. It was performed under the direction of Leonard Bernstein at a concert to mark the fall of the Berlin Wall, yet it also serves as a ghastly and ironic leitmotif in Stanley Kubrick's A Clockwork Orange. Hitler celebrated his birthdays with it, and the government of Rhodesia made it their anthem. And played in German concentration camps by the imprisoned, it also figured prominently at Mitterand's 1981 investiture.

In his remarkable history of one of the most popular symphonic works of the modern period, Buch traces such complex and contradictory uses—and abuses—of Beethoven's Ninth Symphony since its premier in 1824. Buch shows that Beethoven consciously drew on the tradition of European political music, with its mix of sacred and profane, military and religious themes, when he composed his symphony. But while Beethoven obviously had his own political aspirations for the piece—he wanted it to make a statement about ideal power—he could not have had any idea of the antithetical political uses, nationalist and universalist, to which the Ninth Symphony has been put since its creation. Buch shows us how the symphony has been "deployed" throughout nearly two centuries, and in the course of this exploration offers what was described by one French reviewer as "a fundamental examination of the moral value of art." Sensitive and fascinating, this account of the tangled political existence of a symphony is a rare book that shows the life of an artwork through time, shifted and realigned with the currents of history.
AUTHOR BIOGRAPHY
Esteban Buch is the director of studies at the École des Hautes Études en Sciences Sociales in Paris. He is the author of Histoire d'un secret: À propos de la Suite lyrique d'Alban Berg. Richard Miller has translated more than seventy books and articles from the French, including Roland Barthes's The Pleasure of the Text andBrassaï's The Secret of the Thirties.
TABLE OF CONTENTS


Introduction: The States of Joy
Part I. The Birth of Modern Political Music
1. God Save the King and the Handel Cult
2. La Marseillaise and the "Supreme Being"
3. The Ode to Joy and the Emperor's Anthem
4. Beethoven and the Concert of Europe
5. The Ninth Symphony
Part II. Political Reception of the Ode to Joy
6. The Romantic Cult
7. The 1845 Ceremony at Bonn
8. The Ninth in the Era of Nationalist Movements
9. The 1927 Centenary
10. Beethoven as führer
11. From Year Zero to the European Anthem
12. From Apartheid's Anthem to the Dismantling of the Berlin Wall
Conclusion: Criticism and the Future of a Dream
Acknowledgments
Notes
Bibliography
Index