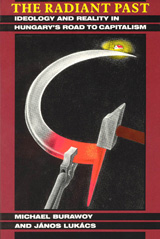 Communism, once heralded as the "radiant future" of all humanity, has now become part of Eastern Europe's past. What does the record say about the legacy of communism as an organizational system?

Michael Burawoy and Janos Lukacs consider this question from the standpoint of the Hungarian working class. Between 1983 and 1990 the authors carried out intensive studies in two core Hungarian industries, machine building and steel production, to produce the first extended participant-observation study of work and politics in state socialism.

"A fascinating and engagingly written eyewitness report on proletarian life in the waning years of goulash communism. . . . A richly rewarding book, one that should interest political scientists in a variety of subfields, from area specialists and comparativists to political economists, as well as those interested in Marxist and post-Marxist theory."—Elizabeth Kiss, American Political Science Review

"A very rich book. . . . It does not merely offer another theory of transition, but also presents a clear interpretive scheme, combined with sociological theory and vivid ethnographic description."—Ireneusz Bialecki, Contemporary Sociology

"Its informed skepticism of post-Communist liberal euphoria, its concern for workers, and its fine ethnographic details make this work valuable."—"àkos Róna-Tas, American Journal of Sociology
TABLE OF CONTENTS