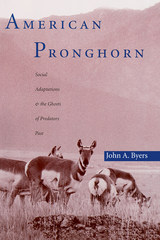 Pronghorn antelope are the fastest runners in North America, clocked at speeds of up to 100 kilometers per hour. Yet none of their current predators can come close to running this fast. Pronghorn also gather in groups, a behavior commonly viewed as a "safety in numbers" defense. But again, none of their living predators are fearsome enough to merit such a response.

In this elegantly written book, John A. Byers argues that these mystifying behaviors evolved in response to the dangerous predators with whom pronghorn shared their grassland home for nearly four million years: among them fleet hyenas, lions, and cheetahs. Although these predators died out ten thousand years ago, pronghorn still behave as if they were present—as if they were living with the ghosts of predators past.

Byers's provocative hypothesis will stimulate behavioral ecologists and mammalogists to consider whether other species' adaptations are also haunted by selective pressures from predators past. The book will also find a ready audience among evolutionary biologists and paleontologists.
TABLE OF CONTENTS