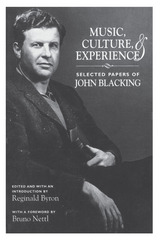 One of the most important ethnomusicologists of the century, John Blacking achieved international recognition for his book, How Musical Is Man? Known for his interest in the relationship of music to biology, psychology, dance, and politics, Blacking was deeply committed to the idea that music-making is a fundamental and universal attribute of the human species. He attempted to document the ways in which music-making expresses the human condition, how it transcends social divisions, and how it can be used to improve the quality of human life.

This volume brings together in one convenient source eight of Blacking's most important theoretical papers along with an extensive introduction by the editor. Drawing heavily on his fieldwork among the Venda people of South Africa, these essays reveal his most important theoretical themes such as the innateness of musical ability, the properties of music as a symbolic or quasi-linguistic system, the complex relation between music and social institutions, and the relation between scientific musical analysis and cultural understanding.
TABLE OF CONTENTS


Foreword
Bruno Nettl
Acknowledgments
The Ethnomusicology of John Blacking
1: Expressing Human Experience through Music
2: The Problem of Musical Description
3: The Music of Venda Girls' Initiation
4: Music and the Historical Process in Vendaland
5: The Study of Musical Change
6: Reflections on the Effectiveness of Symbols
7: The Music of Politics
8: Music, Culture, and Experience
A Note on Pronunciation
Works by John Blacking
References
Index