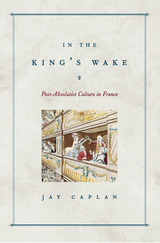 Long before the guillotines of the 1789 Revolution brought a grisly political end to the ancien régime, Jay Caplan argues, the culture of absolutism had already perished. In the King's Wake traces the emergence of a post-absolutist culture across a wide range of works and genres: Saint-Simon's memoirs of Louis XIV and the Regency; Voltaire's first tragedy, Oedipe; Watteau's last great painting, L'Enseigne de Gersaint; the plays of Marivaux; and Casanova's History of My Life.

While absolutist culture had focused on value directly represented in people (e.g., those of noble blood) and things (e.g., coins made of precious metals), post-absolutist culture instead explored the capacity of signs to stand for something real (e.g., John Law's banknotes or Marivaux's plays in which actions rather than birth signify nobility). Between the image of the Sun King and visions of the godlike Romantic self, Caplan discovers a post-absolutist France wracked by surprisingly modern conflicts over the true sources of value and legitimacy.
TABLE OF CONTENTS