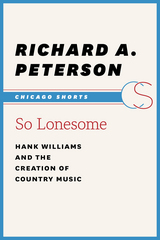 So Lonesome: Hank Williams and the Creation of Country Music
by Richard A. Peterson
University of Chicago Press, 1997
eISBN: 978-0-226-09930-9
Hank Williams (1923–53) was an American singer-songwriter and musician regarded as the most important country music artist of all time, creator of an unforgettable sound and persona that helped to define the genre from its infancy and beyond. Though unable to read or notate music to any substantive degree, Williams recorded 11 number one hits between 1948 and 1953, which carried him to music’s mainstream and left an enduring legacy. In So Lonesome, Richard A. Peterson captures the free-wheeling entrepreneurial spirit of an era gone by, when the Grand Ole Opry put Nashville’s star on the map, while detailing how Williams came to fame and helped launch country music both during his life and after his death. More than just a history of the music and one of its most celebrated performers, So Lonesome explores what it means to live an authentic life within the confines of marketing popular culture.

AUTHOR BIOGRAPHY
Richard A. Peterson (1932–2010) was emeritus professor of sociology at Vanderbilt University. He was the founding chairman of the American Sociological Association's culture section. He was best known as a scholar of popular music, especially country-western music. Creating Country Music: Fabricating Authenticity has had a substantial influence on subsequent scholarship.
TABLE OF CONTENTS