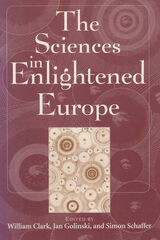 Radically reorienting our understanding of the Enlightenment, this book explores the complex relations between "enlightened" values and the making of scientific knowledge. Here monsters and automata, barometers and botanical gardens, polite academies and boisterous clubs are all given their due place in the landscape of enlightened Europe.

The contributors examine the production of new disciplines through work with instruments and techniques; consider how institutions of public taste and conversation helped provide a common frame for the study of human and nonhuman natures; and explore the regional operations of scientific culture at the geographical fringes of Europe.

Implicated in the rise of both fascism and liberal secularism, the moral and political values that shaped the Enlightenment remain controversial today. Through careful scrutiny of how these values influenced and were influenced by the concrete practices of its sciences, this book gives us an entirely new sense of the Enlightenment.
TABLE OF CONTENTS