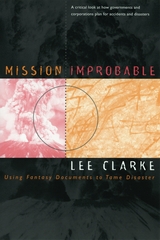 How does the government or a business plan for an unimaginable disaster-a meltdown at a nuclear power plant, a gigantic oil spill, or a nuclear attack? Lee Clarke examines actual attempts to "prepare" for these catastrophes and finds that the policies adopted by corporations and government agencies are fundamentally rhetorical: the plans have no chance to succeed, yet they serve both the organizations and the public as symbols of control, order, and stability. These "fantasy documents" attempt to inspire confidence in organizations, but for Clarke they are disturbing persuasions, soothing our perception that we ultimately cannot control our own technological advances.

For example, Clarke studies corporations' plans for cleaning up oil spills in Prince William Sound prior to the Exxon Valdez debacle, and he finds that the accepted strategies were not just unrealistic but completely untenable. Although different organizations were required to have a cleanup plan for huge spills in the sound, a really massive spill was unprecedented, and the accepted policy was little more than a patchwork of guesses based on (mostly unsuccessful) cleanups after smaller accidents.

While we are increasingly skeptical of big organizations, we still have no choice but to depend on them for protection from large-scale disasters. We expect their specialists to tell the truth, and yet, as Clarke points out, reassuring rhetoric (under the guise of expert prediction) may have no basis in fact or truth because no such basis is attainable.

In uncovering the dangers of planning when implementation is a fantasy, Clarke concludes that society would be safer, smarter, and fairer if organizations could admit their limitations.

"An incursion into new territory written with insight and flair, Clarke's book achieves a revolution in understanding plans as an organizational activity-how they come about, why they go awry, and the often-disastrous disconnect between plans and an organization's ability to carry them out. A book that will fascinate general readers, administrators, organization theorists, and disaster buffs, Mission Improbable stands as a valuable companion volume to Pressman and Wildavsky's Implementation."—Diane Vaughan, author of The Challenger Launch Decision
AUTHOR BIOGRAPHY
Lee Clarke is a sociologist at Rutgers University. He is the author of Acceptable Risk? Making Decisions in a Toxic Environment and coauthor of Organizations, Uncertainties, and Risk.
TABLE OF CONTENTS