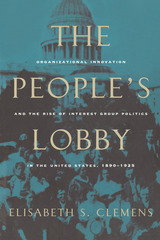 In this pathbreaking work, Elisabeth S. Clemens recovers the social origins of interest group politics in the United States. Between 1890 and 1925, a system centered on elections and party organizations was partially transformed by increasingly prominent legislative and administrative policy-making as well as the insistent participation of non-partisan organizations.

Clemens sheds new light on how farmers, workers, and women invented strategies to circumvent the parties. Voters learned to monitor legislative processes, to hold their representatives accountable at the polls, and to institutionalize their ongoing participation in shaping policy. Closely analyzing the organizational politics in three states—California, Washington, and Wisconsin—she demonstrates how the political opportunity structure of federalism allowed regional innovations to exert leverage on national political institutions.

An authoritative statement on the changes in American politics during the Progressive Era, this book will interest political scientists, sociologists, and American historians.
TABLE OF CONTENTS


List of Illustrations
Acknowledgments
List of Abbreviations
Prologue
1: Partisan Politics: The Evil and the Remedy
2: Organizational Repertoires and Institutional Change
3: The Experiment Station: Political Innovation and Diffusion among the States
4: Neither Friends Nor Enemies: Organized Labor and Partisan Politics
5: From Agrarian Protest to Business Politics
6: Politics without Party: The Organizational Accomplishments of Disenfranchised Women
7: Challenge and Crystallization: The Institutionalization of Reform in Three States
8: "The Menace of New Privilege"
Coda: In Practice, in Theory
Notes
References
Index