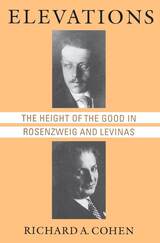 Elevations is a series of closely related essays on the ground-breaking philosophical and theological work of Emmanuel Levinas and Franz Rosenzweig, two of the twentieth century's most important Jewish philosophers. Focusing on the concept of transcendence, Richard A. Cohen shows that Rosenzweig and Levinas join the wisdom of revealed religions to the work of traditional philosophers to create a philosophy charged with the tasks of ethics and justice. He describes how they articulated a responsible humanism and a new enlightenment which would place moral obligation to the other above all other human concerns. This elevating pull of an ethics that can account for the relation of self and other without reducing either term is the central theme of these essays.

Cohen also explores the ethical philosophy of these two thinkers in relation to Nietzsche, Husserl, Heidegger, Buber, Sartre, and Derrida. The result is one of the most wide-ranging and lucid studies yet written on these crucial figures in philosophy and Jewish thought.
TABLE OF CONTENTS


Preface
Acknowledgments
Abbreviations
1: Jewish Election in the Thought of Franz Rosenzweig
2: Authentic Self and History: An Alternative to Heidegger
3: Rosenzweig versus Nietzsche
4: Rosenzweig contra Buber: Personal Pronouns
5: Emmanuel Levinas: Philosopher and Jew
6: On Temporality and Time
7: Non-in-difference
8: G-d in Levinas: The Justification of Justice and Philosophy
9: The Metaphysics of Gender
10: Levinas, Rosenzweig, and the Phenomenologies of Husserl and Heidegger
11: The Face of Truth and Jewish Mysticism
12: Absolute Positivity and Ultrapositivity: Beyond Husserl
13: On the Suffering of Meaning: Levinas "Outside" Heidegger's "Threshold"
through Rosenzweig's "Gate"
14: Derrida's (Mal)reading of Levinas
Bibliography
Index