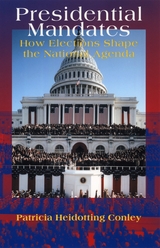 Presidents have claimed popular mandates for more than 150 years. How can they make such claims when surveys show that voters are uninformed about the issues? In this groundbreaking book, Patricia Conley argues that mandates are not mere statements of fact about the preferences of voters. By examining election outcomes from the politicians' viewpoint, Conley uncovers the inferences and strategies—the politics—that translate those outcomes into the national policy agenda.

Presidents claim mandates, Conley shows, only when they can mobilize voters and members of Congress to make a major policy change: the margin of victory, the voting behavior of specific groups, and the composition of Congress all affect their decisions. Using data on elections since 1828 and case studies from Truman to Clinton, she demonstrates that it is possible to accurately predict which presidents will ask for major policy changes at the start of their term. Ultimately, she provides a new understanding of the concept of mandates by changing how we think about the relationship between elections and policy-making.
AUTHOR BIOGRAPHY
Patricia Heidotting Conley, recipient of the American Political Science Association's E. E. Schattschneider Award, is an assistant professor of political science at Northwestern University.
TABLE OF CONTENTS