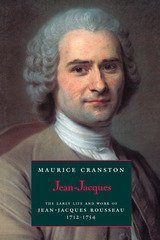 Jean-Jacques: The Early Life and Work of Jean-Jacques Rousseau, 1712-1754
by Maurice Cranston
University of Chicago Press, 1991
Paper: 978-0-226-11862-8
In the first volume of his trilogy, noted political philosopher Maurice Cranston draws from original manuscript sources to trace Rousseau's life from his birth in provincial obscurity in Geneva, through his youthful wanderings, to his return to Geneva in 1754 as a celebrated writer and composer.

"[An] admirable biography which is as meticulous, calm, reasonable, and judicious as its subject is passionate and tumultuous."—Keith Michael Baker, Washington Post Book World

"The definitive biography, as scholarly as it is entertaining."—The Economist

"Exceptionally fresh . . . . [Cranston] seems to know exactly what his readers need to know, and thoughtfully enriches the background—both physical and intellectual—of Rousseau's youthful peregrinations . . . . He makes the first part of Rousseau's life as absorbing as a picaresque novel. His fidelity to Rousseau's ideas and to his life as it was lived is a triumph of poise."—Naomi Bliven, The New Yorker

Maurice Cranston (1920-1993), a distinguished scholar and recipient of the James Tait Black Memorial Prize for his biography of John Locke, was professor of political science at the London School of Economics. His numerous books include The Romantic Movement and Philosophers and Pamphleteers, and translations of Rousseau's The Social Contract and Discourse on the Origins of Inequality.
TABLE OF CONTENTS


List of Plates
Map
Introduction
1. Geneva
2. Bossey
3. Annecy
4. Turin
5. A Sentimental Education
6. Chambéry
7. Les Charmettes
8. Lyons
9. Paris
10. Venice
11. 'Les Muses Galantes'
12. The Encyclopaedist
13. The Moralist
14. The Philosopher of Music and Language
15. On the Origins of Inequality
16. The Reformer Reformed
17. The Return to Geneva
List of the Principal Abbreviations Used on the Notes
Notes
Index