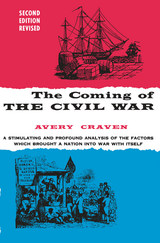 "In recent years a highly industrious school of historians has begun asking whether the war should have been fought at all and whether it was perhaps not more the fault of the North than of the South. Seeking to revise earlier judgments they have become known as the revisionists, and one of the most gifted and studious of them all is Avery Craven, whose The Coming of the Civil War . . . is one of the landmarks of revisionist literature."—Bruce Catton, American Heritage

". . . those who would examine the democratic process during a period of progressive breakdown, in order to understand the dangers it embodies within itself, will find The Coming of the Civil War a classic analysis."—Louis D. Rubin, Jr., Sewanee Review

"The book has always been recognized, even by its most severe critics, as a work of consummate scholarship."—T. Harry Williams, Baton Rouge Morning Advocate
TABLE OF CONTENTS


I. The National Setting
II. A Way of Life
III. The Rural Depression, 1800-1832
IV. By the Sweat of Their Faces
V. The Cotton Kingdom Rises
VI. The Northern Attack on Slavery
VII. The Southern Defense of Slavery
VIII. Slavery and Expansion
IX. The Politicians and Slavery
X. Political Revolt
XI. The First Crisis
XII. The Union on Trial
XIII. The Northwest Gets Excited
XIV. Sectional Reactions to Events
XV. Building the Republican Party
XVI. The Last Crisis
XVII. The Breakup of the Union
Notes
Index