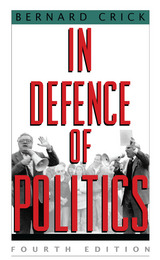 In Defense of Politics
by Bernard Crick
University of Chicago Press, 1993
Paper: 978-0-226-12067-6
In this illuminating celebration of the political world, Bernard Crick asserts that politics, with
its compromises and power struggles, remains the only tested alternative to government by
coercion, making both freedom and order possible in heterogeneous societies. For Crick,
politics is messy and complex, and his book defends it against those who would identify it with (and reduce it to) ideology, democracy, nationalism, or technology.

This Fourth edition has been updated to include an assessment of the revolutions in 1989 in
Eastern Europe. It also examines current situations in Northern Ireland, Israel and Palestine,
and South Africa.

“A short book written with verve and brilliance. . . . He has written an exceedingly clever and
disturbing book on important issues, all that he writes is alive and much of what he says, even when it seems perversely provocative, turns out to be penetrating and serious.”
—Isaiah Berlin, 20th Century

“One of the most thoughtful products of the political dialogues of the London School of
Economics since the great days of Tawney, Dalton, Wallas and Hobhouse. Its sobriety,
liberal spirit and toughness of mind are rare qualities in any political work.”
—Edward Shils, Guardian
AUTHOR BIOGRAPHY
Bernard Crick is emeritus professor of politics at Birkbeck College, London, and honorary
fellow of Edinburgh University. Among his publications are George Orwell: A Life.
TABLE OF CONTENTS