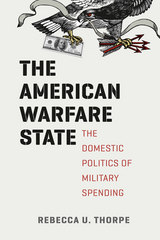 How is it that the United States—a country founded on a distrust of standing armies and strong centralized power—came to have the most powerful military in history? Long after World War II and the end of the Cold War, in times of rising national debt and reduced need for high levels of military readiness, why does Congress still continue to support massive defense budgets?
In The American Warfare State, Rebecca U. Thorpe argues that there are profound relationships among the size and persistence of the American military complex, the growth in presidential power to launch military actions, and the decline of congressional willingness to check this power. The public costs of military mobilization and war, including the need for conscription and higher tax rates, served as political constraints on warfare for most of American history. But the vast defense industry that emerged from World War II also created new political interests that the framers of the Constitution did not anticipate. Many rural and semirural areas became economically reliant on defense-sector jobs and capital, which gave the legislators representing them powerful incentives to press for ongoing defense spending regardless of national security circumstances or goals. At the same time, the costs of war are now borne overwhelmingly by a minority of soldiers who volunteer to fight, future generations of taxpayers, and foreign populations in whose lands wars often take place.
Drawing on an impressive cache of data, Thorpe reveals how this new incentive structure has profoundly reshaped the balance of wartime powers between Congress and the president, resulting in a defense industry perennially poised for war and an executive branch that enjoys unprecedented discretion to take military action.
AUTHOR BIOGRAPHY
Rebecca U. Thorpe is assistant professor of political science at the University of Washington. She lives in Seattle.
REVIEWS
“Rebecca U. Thorpe offers the most compelling argument I have seen for Congress’s diminished role in the domestic politics of war during the last half-century. It’s an argument moreover that no one has advanced so persuasively or meticulously. The American Warfare State constitutes an essential contribution to ongoing debates about the domestic politics of war.”
— William Howell, University of Chicago

"When President Eisenhower first warned of the dangers posed by the warfare state, too few Americans paid attention. Now, in this carefully argued and entirely persuasive monograph, Rebecca U. Thorpe explains how that state operates and why it persists. In updating Ike's warning, she performs a great service. Perhaps this time we'll heed it."
— Andrew J. Bacevich, author of Washington Rules: America's Path to Permanent War

“In this first-rate study of the political economy of defense spending from World War II to 2008, Rebecca U. Thorpe asks why military expenditures in the postwar era ceased to follow historic patterns of contraction after wartime and have remained consistently high even during periods of relative international calm. Her answer focuses on the migration of defense contracting to homogeneous economies in rural and exurban areas that depend disproportionately on the flow of defense dollars. Through innovative tracking of budget outlays to local economies, Thorpe has revealed the connection between constituency interests and DOD budgets that most political observers believed to exist but that had eluded previous researchers.”
— Linda L. Fowler, Dartmouth College

“[Thorpe’s] book makes an especially successful and important contribution to the large literature on the ‘military-industrial complex’ dating back to even before President Dwight Eisenhower coined the term in his 1961 Farewell Address. . . . The American Warfare State makes a significant step forward in research on the politics of US military spending. Its emphasis on the reliance of some rural areas on defense contracting and the role of distributive politics in furthering executive independence is especially helpful. . . . The patterns of civil, political, and military relations Thorpe has identified so astutely are likely to remain operative for a long time to come.”
— Michigan War Studies Review

“[Thorpe] provides an integrated analysis explaining not only US military spending but also the increasing power of the presidency and the reversal of America’s long-standing aversion to large military forces. . . . This is an important study. . . . Highly recommended.”
— Choice

“In The American Warfare State, Thorpe attempts to answer what she calls ‘the fundamental puzzle’ of American politics: ‘why a nation founded on a severe distrust of standing armies and centralized power developed and maintained the most powerful military in history.’ The answer isn’t as obvious as it might seem. Thorpe traces the creation of a permanent war economy back to World War II, when war production expanded into new locales, especially the suburbs of major cities and the agricultural or underdeveloped areas of the South and West.“
— Cato Journal

“Scholarship on the constitutional and political roles of Congress and the American presidency regarding war powers continues to thrive. Thorpe’s well-researched new book, The American Warfare State, adds to the literature by focusing on Congress’s influence on federal military spending and its role in the rise of a military-industrial complex. . . . Thorpe generates numerous findings that should open doors to additional research paths for scholars regarding the growth of the military establishment. . . . Overall, this book represents an important contribution, and it will be of interest to congressional, presidency, and public policy scholars.”
— Congress and the Presidency

“A valuable contribution to our understanding of how the division of war-making powers between the US Congress and the president intended by the framers of the American constitution has so badly eroded since the Second World War. [Thorpe] makes a strong theoretical case that, for a century and a half, Congress’s power to authorise or not authorise war rested on the fact that America had no sizable standing army, no full-scale armaments industry and no large stockpiles of modern weapons, such as cruise missiles or drones, that a president could use to initiate hostilities without dispatching troops. She also develops and applies a refined statistical model to demonstrate how the spread of military-dependent congressional districts has undermined the constitutional balance. . . . If her model holds up, it will represent a major research breakthrough. Coupled with her sophisticated constitutional analysis, it makes The American Warfare State required reading for anyone interested in this fundamental issue.”
— Survival: Global Politics and Strategy, journal of the International Institute for Strategic Studies

“Thorpe’s book takes us through the origins of the American military in the debates of our founding fathers.... She has written an important book. You should read it.”
— Capt. John Byron, USN (Ret.), Foreign Policy

"The American Warfare State does exactly what a groundbreaking book should do: It provides new evidence and analysis in a cogent argument, and leaves readers mulling new questions, provoked by its findings, about larger implications and future research agendas in American politics."
— Perspectives on Politics

Part I. Theoretical and Historical Overview

Part III. You and Whose Army? Expansive Presidential War Powers