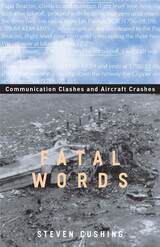 On March 27, 1977, 583 people died when KLM and Pan Am 747s collided on a crowded, foggy runway in Tenerife, the Canary Islands. The cause, a miscommunication between the pilot and the air traffic controller. The pilot radioed, "We are now at takeoff," meaning that the plane was lifting off, but the tower controller misunderstood and thought the plane was waiting on the runway.

In Fatal Words, Steven Cushing explains how miscommunication has led to dozens of aircraft disasters, and he proposes innovative solutions for preventing them. He examines ambiguities in language when aviation jargon and colloquial English are mixed, when a word is used that has different meanings, and when different words are used that sound alike. To remedy these problems, Cushing proposes a visual communication system and a computerized voice mechanism to help clear up confusing language.

Fatal Words is an accessible explanation of some of the most notorious aircraft tragedies of our time, and it will appeal to scholars in communications, linguistics, and cognitive science, to aviation experts, and to general readers.
TABLE OF CONTENTS