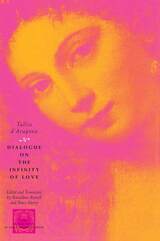 Celebrated as a courtesan and poet, and as a woman of great intelligence and wit, Tullia d'Aragona (1510–56) entered the debate about the morality of love that engaged the best and most famous male intellects of sixteenth-century Italy. First published in Venice in 1547, but never before published in English, Dialogue on the Infinity of Love casts a woman rather than a man as the main disputant on the ethics of love.

Sexually liberated and financially independent, Tullia d'Aragona dared to argue that the only moral form of love between woman and man is one that recognizes both the sensual and the spiritual needs of humankind. Declaring sexual drives to be fundamentally irrepressible and blameless, she challenged the Platonic and religious orthodoxy of her time, which condemned all forms of sensual experience, denied the rationality of women, and relegated femininity to the realm of physicality and sin. Human beings, she argued, consist of body and soul, sense and intellect, and honorable love must be based on this real nature.

By exposing the intrinsic misogyny of prevailing theories of love, Aragona vindicates all women, proposing a morality of love that restores them to intellectual and sexual parity with men. Through Aragona's sharp reasoning, her sense of irony and humor, and her renowned linguistic skill, a rare picture unfolds of an intelligent and thoughtful woman fighting sixteenth-century stereotypes of women and sexuality.
AUTHOR BIOGRAPHY
Rinaldina Russell is professor of European Languages at Queens College, New York. Bruce Merry is professor of Modern Languages at John Cook University of North Queensland, Australia.
TABLE OF CONTENTS


The Other Voice in Early Modern Europe: Introduction to the Series
Introduction by Rinaldina Russell
Suggestions for Further Reading
Dialogue on the Infinity of Love
Preface
Dedication
Dialogue
Index