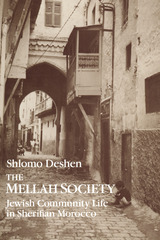 The Mellah Society is a compact yet detailed and fascinating account of Jewish life in precolonial Morocco, based on the voluminous but rarely studied writings of eighteenth- and nineteenth-century Judeo-Moroccan sages.

Shlomo Deshen, author of several books on North African Jewish immigrants to Israel, here turns his attention to the past. Taking as his focus the tension between individualism and communal authority—symbolized by the walls of the mellahs, the Jewish quarters—he applies to traditional Moroccan Jewish society questions of concern to sociologists everywhere regarding political organization, economic activity, religion, and the family.

From such documents as private correspondence, archival photographs, and the legal commentaries of rabbis who served in the Jewish community courts, Deshen draws out details of daily life: disputes between spouses, businessmen, craftsmen, and inheritors; the ramifications of marriage contracts; and claims involving community taxes and extortions by Muslim potentates. Linking this material with recent historical and anthropological studies of the Maghreb, Deshen reconstructs a community about which little has been known and places it squarely within the context of traditional Moroccan society.

Individual chapters deal with relations between Muslims and Jews, the material conditions of Jewish life, and the nature of politics within the mellah. Deshen devotes particular attention to the nature of the Moroccan rabbinate, the sociology of the mellah synagogue, lay community leadership, and the historic role of the Sephardic heritage in Morocco after the expulsion from medieval Spain. His close study of the nature of the extended family in traditional Morocco corrects popular misconceptions.

Originally published in Israel in 1983, now translated and expanded by its author, The Mellah Society draws upon Middle Eastern and Jewish history, textual Judaic studies, and social anthropology to make an original contribution that will interest scholars of the Middle East and North Africa as well as anyone concerned with Jewish history and ethnicity.
AUTHOR BIOGRAPHY
Shlomo Deshen is professor of social anthropology at Tel-Aviv University. His many books include Immigrant Voters in Israel and (with Moshe Shokeid) The Predicament of Homecoming: Cultural and Social Life of North African Immigrants in Israel and Distant Relations: Ethnicity and Politics among Arabs and North African Jews in Israel.
TABLE OF CONTENTS


Preface
Note on Citations
1. Maghrebi Anthropology and Jewish History
2. The Political Base: Jewish and Muslim Moroccans
3. The Economic Base: Population and Occupations
4. Self-Rule I: Individuals and Negidim
5. Self-Rule II: The Taxation and Charity System
6. Self Rule III: The Sages
7. Religious Life: The Synagogues
8. Family Life: Individuals among Their Relatives
9. Conclusions
Notes
References
Index