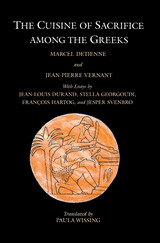 For the Greeks, the sharing of cooked meats was the fundamental communal act, so that to become vegetarian was a way of refusing society. It follows that the roasting or cooking of meat was a political act, as the division of portions asserted a social order. And the only proper manner of preparing meat for consumption, according to the Greeks, was blood sacrifice.

The fundamental myth is that of Prometheus, who introduced sacrifice and, in the process, both joined us to and separated us from the gods—and ambiguous relation that recurs in marriage and in the growing of grain. Thus we can understand why the ascetic man refuses both women and meat, and why Greek women celebrated the festival of grain-giving Demeter with instruments of butchery.

The ambiguity coded in the consumption of meat generated a mythology of the "other"—werewolves, Scythians, Ethiopians, and other "monsters." The study of the sacrificial consumption of meat thus leads into exotic territory and to unexpected findings.

In The Cuisine of Sacrifice, the contributors—all scholars affiliated with the Center for Comparative Studies of Ancient Societies in Paris—apply methods from structural anthropology, comparative religion, and philology to a diversity of topics: the relation of political power to sacrificial practice; the Promethean myth as the foundation story of sacrificial practice; representations of sacrifice found on Greek vases; the technique and anatomy of sacrifice; the interaction of image, language, and ritual; the position of women in sacrificial custom and the female ritual of the Thesmophoria; the mythical status of wolves in Greece and their relation to the sacrifice of domesticated animals; the role and significance of food-related ritual in Homer and Hesiod; ancient Greek perceptions of Scythian sacrificial rites; and remnants of sacrificial ritual in modern Greek practices.
TABLE OF CONTENTS


Translator's Note
1. Culinary Practices and the Spirit of Sacrifice
Marcel Detienne
2. At Man's Table: Hesiod's Foundation Myth of Sacrifice
Jean-Pierre Vernant
3. Greek Animals: Toward a Topology of Edible Bodies
Jean-Louis Durand
4. Ritual as Instrumentality
Jean-Louis Durand
5. The Violence of Wellborn Ladies: Women in the Thesmophoria
Marcel Detienne
6. The Feast of the Wolves, or the Impossible City
Marcel Detienne and Jesper Svenbro
7. Food in the Countries of the Sun
Jean-Pierre Vernant
8. Self-cooking Beef and the Drinks of the Ares
François Hartog
9. Sanctified Slaughter in Modern Greece: The "Kourbánia" of the Saints
Stella Georgourdi
10. A Bibliography of Greek Sacrifice
Jesper Svenbro
Abbreviations
Notes
Index