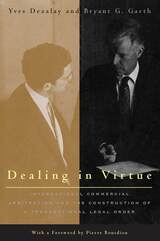 In recent years, international business disputes have increasingly been resolved through private arbitration. The first book of its kind, Dealing in Virtue details how an elite group of transnational lawyers constructed an autonomous legal field that has given them a central and powerful role in the global marketplace.

Building on Pierre Bourdieu's structural approach, the authors show how an informal, settlement-oriented system became formalized and litigious. Integral to this new legal field is the intense personal competition among arbitrators to gain a reputation for virtue, hoping to be selected for arbitration panels. Since arbitration fees have skyrocketed, this is a high-stakes game.

Using multiple examples, Dezalay and Garth explore how international developments can transform domestic methods for handling disputes and analyze the changing prospects for international business dispute resolution given the growing presence of such international market and regulatory institutions as the EEC, the WTO, and NAFTA.

"A fascinating book, which I strongly recommend to all those active in international commercial arbitration, as they will see the arbitral world from new and unthought of perspectives."—Jacques Werner, Journal of International Arbitration
TABLE OF CONTENTS


Foreword by Pierre Bourdieu
Acknowledgments
Pt. 1: Dealing in Virtue
1: Exploring and Representing the World of International Commercial Arbitration
2: Becoming an Arbitrator: Building and Exchanging National and International Symbolic Capital
Pt. 2: Constructing Transnational Private Justice and Legalizing Business Conflicts
3: Merchants of Law as Moral Entrepreneurs: Constructing International Justice out of the Competition for Transnational Business Disputes
4: Setting the Legal Scene for North-South Conflicts and the Collective Construction of the Universality of Law
5: U.S. Litigators, Continental Academics, Petrodollar Construction Projects, and the Lex Mercatoria: A Case Study
Pt. 3: Internationalization and the Transformation of the Landscape for Handling Business Conflicts
6: Between the Worlds of Law and Business: The Contradictions of Business Justice and Its Permanent Reconstruction through Dispute Resolution Mechanisms
7: England: The Contradictions and Limits of an International and Reformist Strategy
8: In and Out of the Multidoor Courthouse: Internationalization and the Transformation of the Landscape of Business Disputing in the United States
9: Vintage Arbitration in Stockholm
10: Social Capital and Legal Capital: Competition and Complementarity in the Market for Business Justice
11: International Legal Practice as Ghetto or Beachhead: Cairo and the Problems of North and South
12: Law and the Frontier: Hong Kong and Transitions from One Imperialism to Another
13: How to Construct Neutrality and Autonomy on the Basis of a Strategy of Double Agent
14: Reintroducing Politics and States in the Market of International Business Disputing
Bibliography
Index