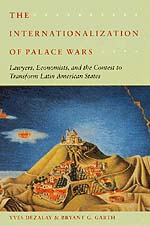 How does globalization work? Focusing on Latin America, Yves Dezalay and Bryant G. Garth show that exports of expertise and ideals from the United States to Argentina, Brazil, Chile, and Mexico have played a crucial role in transforming their state forms and economies since World War II.

Based on more than 300 extensive interviews with major players in governments, foundations, law firms, universities, and think tanks, Dezalay and Garth examine both the production of northern exports such as neoliberal economics and international human rights law and the ways they are received south of the United States. They find that the content of what is exported and how it fares are profoundly shaped by domestic struggles for power and influence—"palace wars"—in the nations involved. For instance, challenges to the eastern intellectual establishment influenced the Reagan-era export of University of Chicago-style neoliberal economics to Chile, where it enjoyed a warm reception from Pinochet and his allies because they could use it to discredit the previous regime.

Bryant G. Garth is the director of the American Bar Foundation. Together they wrote Dealing in Virtue: International Commercial Arbitration and the Construction of a Transnational Legal Order, published by the University of Chicago Press, and coedited Global Prescriptions: The Production, Exportation, and Importation of a New Legal Orthodoxy.
TABLE OF CONTENTS

1.Introduction
2.Retooling Statesmen to Restructure the State: From Héritiers
of European Legal Culture to the Technopols Made in the
USA
3.The Internationalization of Palace Wars

PART TWO
Hegemony Challenged: Making Friends, the Cold War Roots of a
Reformist Strategy
4.The Archeology of the New Universals: The Cold War
Construction of Human Rights and Its Later Avatars
5.The Chicago Boys as Outsiders: Constructinf and
Exporting Counterrevolution
6.Fostering Pluralism and Reformism
7.The Paradox of Symbolic Imperialism: The Southern
Cone as an Explosive Laboratory of Modernity

PART THREE
Competing Universals: The Parallel Construction of Neoliberalism
in the North and the South
8.The Reformist Establishment out of Power: Investing in
Human Rights as an Alternative Political Strategy
9.From Confrontation to Concertación: The National
Production and International Recognition of the New
Universals