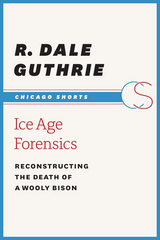 BUY FROM
Ice Age Forensics: Reconstructing the Death of a Wooly Bison
by Dale Guthrie
University of Chicago Press, 2013
eISBN: 978-0-226-14710-9
Frozen mammals of the Ice Age, preserved for millennia in the tundra, have been a source of fascination and mystery since their first discovery over two centuries ago. The 1979 find of a frozen, extinct steppe bison in an Alaskan gold mine allowed paleontologist Dale Guthrie to undertake the first scientific excavation of an Ice Age mummy in North America and to test theories about these enigmatic frozen fauna. In this brilliant remaking of the death of a wooly bison over 36,000 years ago, we’re given a glimpse of what life was like during the Pleistocene Epoch. From torn fragments and patches of deep-frozen skin and insights gleaned from studies of Montana bison, African lions, and Iberian cave art, Ice Age Forensics presents the story of the huge carcass Guthrie calls “Blue Babe”—and the excitement surrounding its reconstruction.
REQUEST ACCESSIBLE FILE