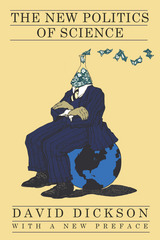 The New Politics of Science
by David Dickson
University of Chicago Press, 1988
Paper: 978-0-226-14763-5
How science "gets done" in today's world has profound political repercussions, since scientific knowledge, through its technical applications, has become an important source of both economic and military power. The increasing dependence of scientific research on funding from business and the military has made questions about the access to and control of scientific knowledge a central issue in today's politics of science.

In The New Politics of Science, David Dickson points out that "the scientific community has its own internal power structures, its elites, its hierarchies, its ideologies, its sanctioned norms of social behavior, and its dissenting groups. And the more that science, as a social practice, forms an integral part of the economic structures of the society in which it is imbedded, the more the boundaries and differences between the two dissolve. Groups inside the scientific community, for example, will use groups outside the community—and vice versa—to achieve their own political ends." In this edition, Dickson has included a new preface commenting on the continuing and increasing influence of industrial and defense interests on American scientific research in the 1980s.
AUTHOR BIOGRAPHY
David Dickson, former editor of New Scientist, has also served as European correspondent for Science and Washington Correspondent for Nature. He is the author of The Politics of Alternative Technology, and many articles appearing in The Economist, The Nation, Science for the People and Nature.
TABLE OF CONTENTS


Preface, 1988
Acknowledgments
Introduction
Figure 1: Post-World War II Funding of Science in the United States
1. The New Politics of Science
Figure 2: The Organization of U.S. Science
2. Universities and Industry: Knowledge as Commodity
3. Science and the Military: Knowledge as Power
4. Science and Foreign Policy: Knowledge as Imperialism
5. Science and Society: Public Participation vs. Democratic Control
6. Regulating Technology: Science as Legitimation
7. Toward a Democratic Strategy for Science
Source Notes
Glossary of Acronyms
Index