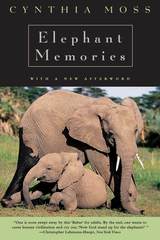 Cynthia Moss has studied the elephants in Kenya's Amboseli National Park for over twenty-seven years. Her long-term research has revealed much of what we now know about these complex and intelligent animals. Here she chronicles the lives of the members of the T families led by matriarchs Teresia, Slit Ear, Torn Ear, Tania, and Tuskless. With a new afterword catching up on the families and covering current conservation issues, Moss's story will continue to fascinate animal lovers.

"One is soon swept away by this 'Babar' for adults. By the end, one even begins to feel an aversion for people. One wants to curse human civilization and cry out, 'Now God stand up for the elephants!'"—Christopher Lehmann-Haupt, New York Times

"Moss tells the story in a style so conversational . . . that I felt like a privileged visitor riding beside her in her rickety Land-Rover as she showed me around the park." —Sarah Blaffer Hrdy, New York Times Book Review

"A prose-poem celebrating a species from which we could learn some moral as well as zoological lessons." —Chicago Tribune
AUTHOR BIOGRAPHY
Cynthia F. Moss is a professor of psychology and member of the Institute for Systems Research at the University of Maryland, College Park. She is the coeditor of Neuroethological Studies on Cognitive and Perceptual Processes.
TABLE OF CONTENTS