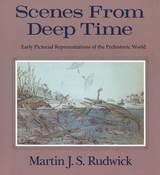 How did the earth look in prehistoric times? Scientists and artists collaborated during the half-century prior to the publication of Darwin's Origin of Species to produce the first images of dinosaurs and the world they inhabited. Their interpretations, informed by recent fossil discoveries, were the first efforts to represent the prehistoric world based on sources other than the Bible. Martin J. S. Rudwick presents more than a hundred rare illustrations from the eighteenth and nineteenth centuries to explore the implications of reconstructing a past no one has ever seen.
TABLE OF CONTENTS


Introduction
1. Creation and the Flood
2. Keyholes into the Past
3. Monsters of the Ancient World
4. A First Sequence of Scenes
5. Domesticating the Monsters
6. The Genre Established
7. Making Sense of It All
Notes
Sources for Figures and Texts
Bibliography
Index