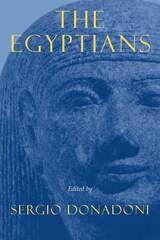 The Egyptians is a vibrant, accessible introduction to the people who lived along the Nile for almost thirty-five centuries. In this collection of essays, eleven internationally renowned Egyptologists present studies of ancient Egyptians arranged by social type—slaves, craftsmen, priests, bureaucrats, the pharaoh, peasants, and women, among others. These individual essays are filled with a wealth of historical detail that both informs and fascinates: we learn, for example, that Egyptian peasants could not afford burial (their corpses were abandoned on the desert fringe), and that it was the bureaucrats who made the Egyptian system tick (the pyramids could not have been built without them).

Read consecutively, the portraits merge to create a larger picture of Egyptian culture, state, and society. The framework of the Egyptian state, in particular, is touched upon in each essay, describing the meticulous administration and well-organized hierarchical system that fostered centuries of stability and prosperity.
TABLE OF CONTENTS