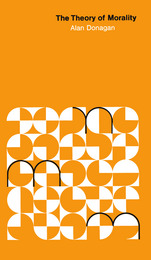 "Let us . . . nominate this the most important theoretical work on ethical or moral theory since John Rawls's Theory of Justice. If you have philosophical inclinations and want a good workout, this conscientious scrutiny of moral assumptions and expressions will be most rewarding. Donagan explores ways of acting in the Hebrew-Christian context, examines them in the light of natural law and rational theories, and proposes that formal patterns for conduct can emerge. All this is tightly reasoned, the argument is packed, but the language is clear."—Christian Century

"The man value of this book seems to me to be that it shows the force of the Hebrew-Christian moral tradition in the hands of a creative philosopher. Throughout the book, one cannot but feel that a serious philosopher is trying to come to terms with his religious-moral background and to defend it against the prevailing secular utilitarian position which seems to dominate academic philosophy."—Bernard Gert, Journal of Medicine and Philosophy
TABLE OF CONTENTS


Preface
1. The Concept of a Theory of Morality
1.1. What a Theory of Morality Is a Theory of
1.2. Morality as a Disposition of Affection and Conduct
1.3. Intuitionism: Old and New
1.4. The Philosophical Interest of the Hebrew-Christian Moral Tradition
1.5. The Investigation Proposed
2. Presuppositions and Principles
2.1. Human Beings and Their World
2.2. Actions, Circumstances, and Consequences
2.3. First-Order and Second-Order Moral Questions
2.4. The Fundamental Principle
2.5. The Structure of the First-Order System
3. First-Order Precepts
3.1. The Classification of First-Order Precepts
3.2. Duties of Human Beings to Themselves
3.3. Noninstitutional Duties to Others
3.4. Contracts
3.5. Property
3.6. The Family
3.7. Civil Society
4. Second-Order Precepts
4.1. Voluntariness and Moral Responsibility
4.2. Intention and Purpose
4.3. Ignorance: Culpable and Inculpable
4.4. Conscience and Conscientiousness
4.5. The Corruption of Consciousness
5. Consistency
5.1. Moral Perplexity
5.2. Doing Evil
That Good May Come
5.3. The Theory of the Double Effect
5.4. Malthusian Problems
6. Consequentialism
6.1. Cases of Necessity
6.2. The Problem of Dirty Hands
6.3. Consequentialist Theories
6.4. Utilitarianism
6.5. The Factor of Ignorance
7. The Foundation of Common Morality
7.1. Can Reason Be Practical?
7.2. Interlude: Universal Prescribers, Ideal Observers, and Rational Contractors
7.3. The Limits of Purpose
7.4. The Theory of the End-in-Itself
7.5. Respect for Rational Nature as a Condition of Self-Respect
7.6. The Limits of Practical Reason
Notes
Select Bibliography
Index