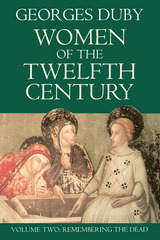 In this volume, one of the greatest medieval historians of our time continues his rich and illuminating inquiry into the lives of twelfth-century women. Georges Duby bases his account on a twelfth-century genre that commemorated the virtues of noblewomen who had died and the roles they came to play in the history of their lineage. From these genealogical works a vivid picture emerges of the lives these women led, the values they held, and the way in which they were viewed by the ecclesiastical and chivalric writers who immortalized them.

The first section outlines the ways in which the dead—in both memory and legend—served to bond noble society in the twelfth century. Drawing on the Gesta by Dudo of Saint Quentin, the second section reflects on the roles that wives, concubines, and other women played during times of war and in the great exchanges of power that established the grand lineages of the Middle Ages. The third section reconstructs women as wives, mothers, and widows through the work of Lambert, Priest of Ardres.
AUTHOR BIOGRAPHY
Georges Duby (1919-1996) was a member of the Académie française and for many years held the distinguished chair in medieval history at the Collège de France. His books include Women of the Twelfth Century, Volume One: Eleanor of Aquitaine & Six Others; Women of the Twelfth Century, Volume Three: Eve & the Church; The Three orders; The Age of Cathedrals; The Knight, the Lady, and the Priest; Love and Marriage in the Middle Ages; and History Continues, all published by the University of Chicago Press.
TABLE OF CONTENTS


Introduction
Part I - Serving the Dead
1. The Dead within the House
2. Women and the Dead
3. Writing about the Dead
4. Remembering Women
Part II - Wives and Concubines
1. The Genealogy of a Eulogy
2. The Trouble with Women
3. Wives
4. Mistresses
5. Arlette
Part III - The Power of Women
1. The Context
2. The Witness
3. Mother Goddesses
4. The Couple
5. Widows
Genealogies