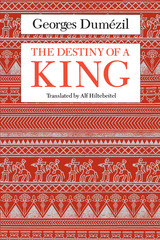 The preeminent scholar of comparative studies of Indo-European society, Georges Dumézil theorized that ancient and prehistoric Indo-European culture and literature revolved around three major functions: sovereignty, force, and fertility. This work treats these functions as they are articulated through "first king" legends found in Indian, Iranian, and Celtic epics, particularly the Mahabharata. Dumézil, drawing on an extraordinarily broad range of Indo-European sources from Scandinavia to India and offering an original and provocative analytic method, set a new agenda for studies in comparative oral literature, historical linguistics, comparative mythology, and history of religions.

The Destiny of a King examines one of the "little" epics within the Mahabharata—the legend of King Yayati, a distant ancestor of the Pandavas, the heroes of the larger epic. Dumézil compares Yayati's attributes and actions with those of the legendary Celtic king Eochaid Feidlech and also finds striking similarities in the stories surrounding the daughters of these two kings, the Indian Madhavi and the Celtic Medb. When he compares these two traditions with the "first king" legends from Iran, he finds such common themes as the apportionment of the earth and the "sin of the sovereign."
TABLE OF CONTENTS